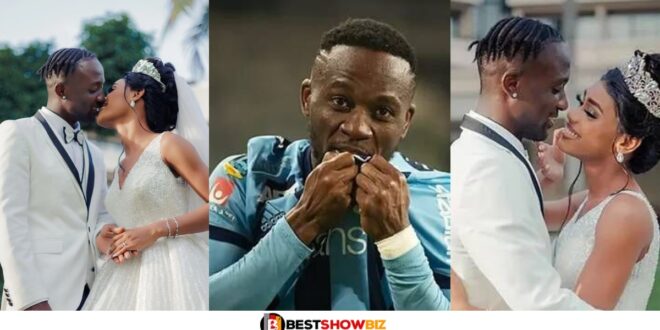 A football player from Sierra Leone who was about to finalize a transfer to Sweden asked his brother to attend his wedding in his place while he completed the transfer.

When the date for Mohamed Buya Turay’s wedding to his partner was set, he was listed on the roster of the Chinese team, Henan Songshan Longmen.

The 27-year-old attacker was contacted by Malmo of Sweden, though, and had to be present to seal the deal.

The Sun said that Turay ultimately decided to forgo his own wedding and requested his brother to stand in for him.

He dispatched his brother to complete the wedding ceremony, however, to ensure that his wife Suad Baydoun was not left on her own.

The groom was absent when the wedding, which was held on July 22, because he had to go sign another contract.

But before leaving for Sweden, the player made sure to get some lovely pictures with his wife.

“But I wasn’t there because Malmo asked me to come here earlier. We took the pictures in advance. So it looks like I was there but I wasn’t. My brother had to represent me at the wedding itself.”

“I will try to get her to Sweden and Malmo now so she can be close to me. She will live here with me.”

Turay played in the club’s Europa League match last week, and since then, he has already started to appreciate life as a Malmo player.