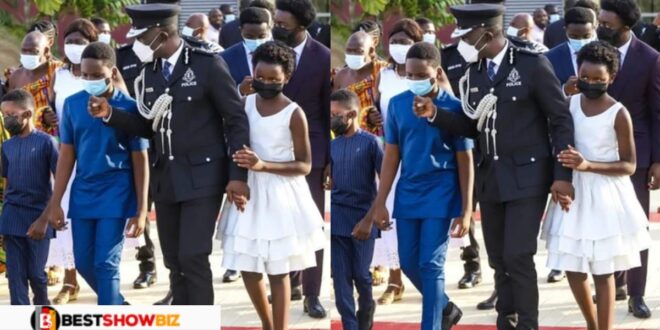 Photos: Beautiful children of IGP Dampare pops up for the first time

Public servants find it difficult to bring their families into the spotlight.

Most people in positions of power in government and other organizations keep their families private for reasons best known to them.

IGP George Akuffo Dampare’s children and other family members, on the other hand, have remained anonymous.

There is little information about them, and only those close to him have access to it.

However, it appears that the public has had the opportunity to see his children, as photos of them with their hardworking father have surfaced on the internet.

It was lovely when the President, Nana Addo Dankwa Akuffo Addo, invited him to be confirmed as the factual Inspector General of the Ghana Police Service after he had been acting for about two months now.

It was not possible for him to witness the historic event alone due to the historic nature of his confirmation as the youngest IGP in Ghana’s history.

In a beautiful photo that has since been posted on the Ghana Police Service’s official Facebook page, his sons and daughter could be seen smartly dressed and following their father.

To symbolize victory, the young men wore suits, while the young lady wore all white.

The last two kids who appeared to be excited were dressed in African-style dresses.