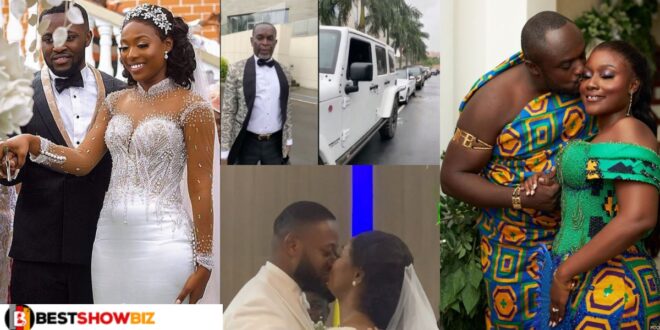 Photos and Videos: Check out the top 4 expensive and lavish wedding that happened in Ghana

Bestshowbiz.com has compiled a list of four of the country’s most lavish wedding ceremonies in the last few years.

These are not your typical weddings; they feature horses, exotic vehicles, massive cakes, and out-of-this-world decorations, all with budgets in the billions of cedis.

These two were the ones who brought the heat to town. Kennedy, the son of Ghanaian millionaire Despite and Tracey, demonstrated to the Royal Wedding planners how to plan a wedding in Ghana to the extreme.

Kency 2020 put so much pressure on Ghanaian celebrities that they were afraid to marry afterward for fear of being judged and mocked.

The marriage ceremony of Barima, CEO of Adinkra Pie, and Anita Sefa Boakye, daughter of the owner of Anita Hotel, was the epitome of extravagance and more.

Read Also  "Am I not a woman"- Serwaa Amihere ask about marriage.

It was clear that Barima Osei Mensah, the CEO of Adinkra Pie, and his wife, Anita Sefa Boakye, intended to impress Ghanaians with their lavish display of wealth!

Anita thrilled in a variety of outfits and even wore an earring worth a whopping $6500. (39,747.50 Ghanaian Cedi). Who wears the average Ghanaian’s six-year salary on their ears just for a wedding? Anita did, and it was stunning.

Osei Kwame Despite’s wealthy family had a fantastic year in 2020, with two of their children marrying.

The wedding was almost identical to Kency’s, but with fewer horses and exotic cars. Even so, it was an eye-catching event.

Kwasi Dadzi, a Ghanaian businessman who prefers to keep his wealth hidden, decided to make the biggest splash possible on the day of his wedding.

His wedding was not widely publicized on social media, but footage from the event led to speculation that he was challenging the Despite family to a wealth battle after displaying a fleet of exotic and expensive cars at his wedding.

The videos we saw on social media were filled with displays of wealth, class, style, and power. A Range Rover, a Jeep Wrangler, and a Rolls Royce, to name a few, were among the fleet of cars spotted at the wedding.

How cool is it that millionaire Kwasi Dadzi had a Rolls Royce convoy exclusively for his wedding?