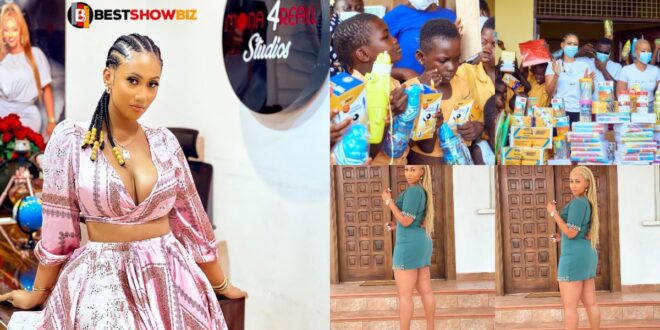 Hajia4real, also known in the entertainment business as Mona4Real, is a fast-rising artist and fashionista who has lent a helping hand to certain pupils at the Darko Yaw Bentum DA Basic School.

Mona, who is well-known for her good attitude toward people, was moved to action after she learned about the problems of a student in a viral video and decided to assist them by donating some basic stationery to them.

Books, pens, school bags, erasers, pencils, marker boards, folders, boxes of chalk, and a variety of other goods were donated to the students.

When Hajia4real arrived at the school, the students greeted her with great enthusiasm because they knew that her presence indicated that everything was going to be alright.

The musicians were praised by the teachers of the children who accepted the things on their behalf.

see photos and video below;