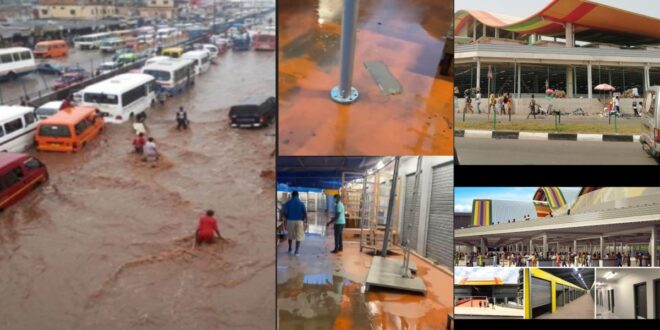 PHOTOS: After a few minutes of rain, the multimillion-dollar new Kejetia market was flooded.

After about 30 minutes of heavy rain in Kumasi on Sunday night, the new Kejetia market in Kumasi was once again flooded.

Traders in the market say that if there is a hard storm, the part of the market floods.

Many of the merchants who had come to open their numerous shops to begin business were left stuck about 7 a.m. on Monday morning because the flood had taken over the forecourts of their shops.

“We have repeatedly requested that KMA and the contractors rectify the situation, but to no avail. When it rains, we have to wait around 2-3 hours before we can open our shops and begin working,” one of the traders told bestshowbiz.com

Read Also  Recent photos of the world's most beautiful child, two years after she was declared.

Nana Kwame Kusi’s chairman of the petty traders association voiced concern about the situation, which had persisted for months after the market opened.

Nana Kwame called for the government’s immediate intervention and assistance in examining the issue and resolving it once and for all.

He couldn’t have finished his speech without criticizing the market’s contractor, who, according to the chairman of the petty traders group, did a shoddy job.

some of the areas around Adum, Roman Hill, Pampaso, and Alabar were not spared from the flood’s effects.