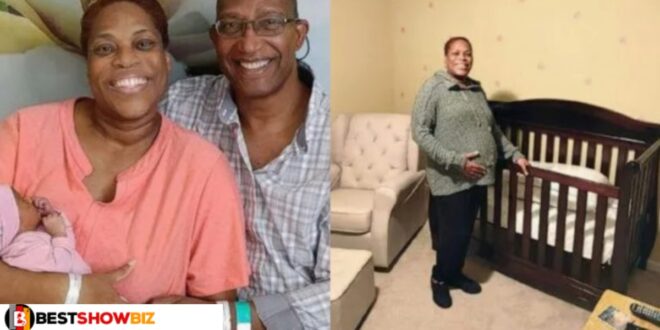 Photos: 50-years-old woman gives birth to first child after many years of infertility

A woman turned 50 and became a mother for the first time after years of infertility.

After more than ten years of trying, Susie Troxler, a psychologist in High Point, North Carolina, gave birth to their daughter, Lily Antonia Troxler, on September 29, 2021.

Her and her husband, Tony Troxler, 61, will be celebrating their first Thanksgiving as parents.

“It’s really, really, really surreal,” Susie said of welcoming a daughter at age 50. “I’d been unmarried, I’d been a wife and now the idea of being a mommy, it still hasn’t sunk in I don’t think.”

Since their marriage 13 years ago, the Troxlers had tried unsuccessfully to conceive naturally.

Susie Troxler explained that neither she nor her husband had considered seeking fertility help because they were unaware of the options available.

She said: “When we got married, we just assumed we’d get pregnant, and then it didn’t happen.

“But we’re both very old-school, and when we grew up, nobody even talked about or discussed IVF [in-vitro fertilization]. It wasn’t even a thing.”

Susie Troxler went in for her annual exam with her new OBGYN at Cone Health, a North Carolina-based health care network where Tony had recently been hired in the security department, three years ago, and things changed.

Susie Troxler had a “pretty uneventful” pregnancy, with mild pregnancy symptoms and no major medical complications, according to her.

Read Also  Former PSG And France Defender, Pierre Adams Has Died At The Age Of 73, After Being In A Coma For 39 Years

On Sept. 29, she had a planned C-section, which was overseen by Harraway-Smith, who the Troxlers credit with initiating the process that led to them becoming parents.

“It was amazing and surreal,” Tony Troxler said of learning he would be a first-time dad.