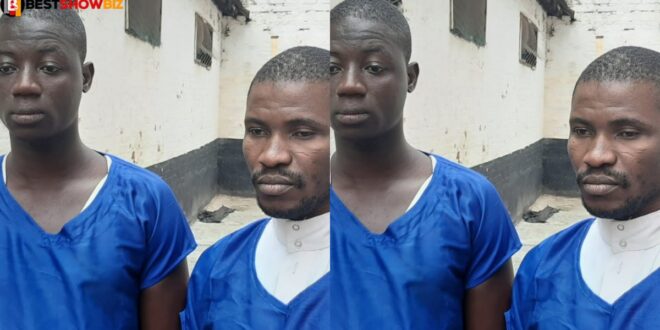 “People of Asante Mampong mistook me for a thief, beat me and rendered me blind, then jailed for 12 years”- Prisoner shares story.

Ibrahim, who claimed to be an electrician, claimed he was confused by the people of Asante Mampong, as a motorcycle robber.

He said he climbed on the back of a motorcycle right outside the house of a client for whom he had gone to work.

Unknowingly, he stated that the bike’s rider had stolen it and was fleeing with it. He claimed he heard a group yelling, “thief, thief,” and the accused robber leapt off his bike and fled.

They treated him like an accomplice, according to the former electrician, and beat him viciously.

Fortunately, he said, the local chief intervened when the mob tried to set him on fire. He claimed, however, that they blinded him by mixing cement with sand and gasoline and applying it to his eyes.

Read Also  Becca’s Mother Has Been Exposed; She Abandoned Her After Giving Birth To Her – Lady Alleges (Video)

“My client even came out and told them I was an electrician hired by him, but they ignored him. He told crimecheckghana that they wanted to kill him.

Ibrahim claimed he was knocked out and turned over to the cops. He claimed the cops took him to a hospital for medical treatment, but the doctors told him they couldn’t help him because he wouldn’t survive.

The inmate stated that he was then taken to court, where he pled not guilty to the robbery allegation. According to him, the judge sentenced him to twelve years in prison.

“I couldn’t speak much since I was really weak when I was taken to court. I declared my innocence in court. When the judge inquired about the motor thief’s whereabouts, I informed him he was dead, and he sentenced me to twelve years in prison,” he claimed.