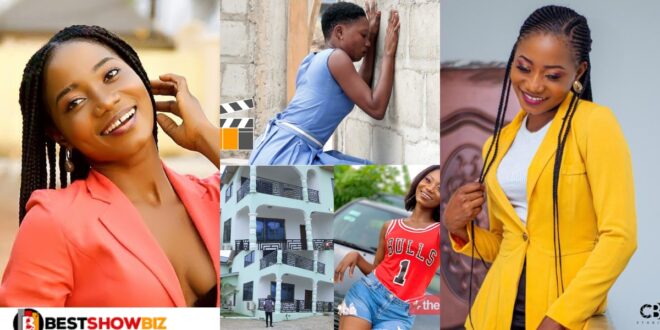 Maame Esi Forson, an actress and comedian, has finally spoken up about the outlandish accusations that she obtained her luxury homes by sleeping with politicians and other powerful men in the country.

During an interview with Delay earlier this week, the young successful actress said that she has 25 acres of land in Accra and Takoradi, in addition to her 6 bedroom mansion and around 20 taxis.

She also claimed that the revenues from her restaurant company helped her build her opulent riches.

Maame Esi claims that every packaged meal she sells earns her ten cedis, which is the source of her 9-day miraculous wealth.

Ghanaians on the internet branded her statements as big falsehoods, claiming that no one could gain such wealth in such a short period of time only by selling food.

Maame Esi was roundly chastised by social media users for joining the ranks of a slew of other female celebrities who claim to have achieved success through hard work while covertly sleeping with men to fund their luxurious trips, expensive bags, and clothing.

Maame Esi has voiced her dissatisfaction with the low-minded people who believe that a young lady can’t achieve anything significant in life without sleeping around in response to these insults and claims.

All those who brutally criticize her are, in her opinion, a bunch of useless individuals full of jealousy and hatred.

She further added that – “Oh she’s too young, she can’t own properties” – is one of the chorus failures sing anytime they see a young person making it big in life.