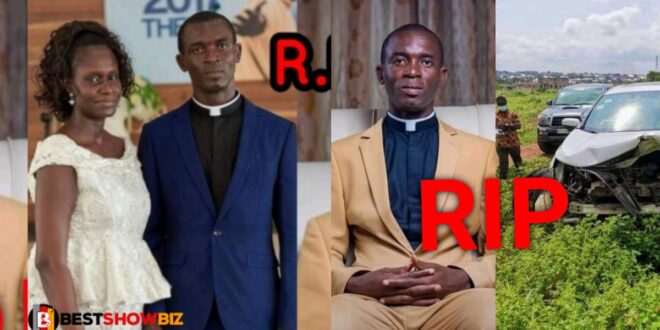 As one of the church’s prominent pastors died in a deadly road accident on his way to a funeral, social media and the entire church of Pentecost have been thrown into a puddle of uncontrollable sorrow.

Many Ghanaians, particularly members of the Church of Pentecost, have been heartbroken by the death of one of its prominent pastors in a road accident while returning from a funeral.

The late Pentecost Pastor Jonathan Koffie’s wife could not hold back her tears. Her husband’s death a week after his birthday celebration, she said, was unforgettable.

The bereft widow resorted to Facebook to express her grief. Some church members also took to social media to express their feelings over the situation. Amenyo Salla, who had been following the pastor during his birthday celebrations, had the following to say:

” The news of Pastor Jonathan Koffie’s death on June 21st, just a week after his birthday celebration, continues to amaze me. It is been a difficult puzzle that we have not been able to solve. And it is possible it will never be.”

The incidence was confirmed by the Church of Pentecost International Worship Center in Odorkor and the national hierarchy. Pentecost University’s Dean of Student Affairs was the late Pastor. He also worked for the Church as a missionary.