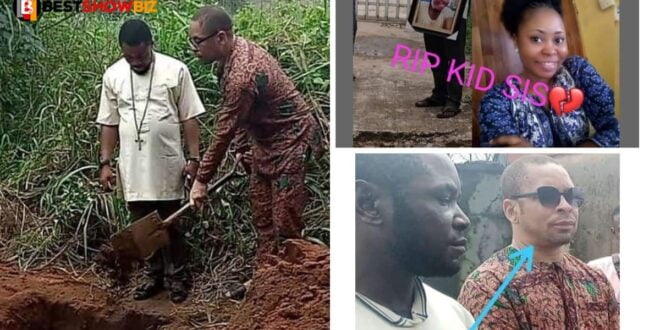 Pastor forced to marry the dead body of his girlfriend who d!ed through abortion

A pastor was forced to marry his late fiancée’s corpse after he allegedly killed her by aborting her while she was unconscious.

The pastor didn’t want the baby since his church frowns upon pregnancy before marriage and it would harm his reputation.

The deceased’s family claims Pastor Sunday invited Chioma over on February 24, 2021, and gave her a drink laced with a narcotic, which knocked her out.

He allegedly took her to a hospital and requested an abortion. The doctor supposedly declined, but the pastor persisted.

During the surgery, Chioma reportedly vomited blood, prompting the doctor to refer her to FMC.

Following that, Rev. Sunday allegedly called her family to inform them that his fiancée was ill.

Chioma died before her relatives could help her.

The priest allegedly tried to conduct an abortion on her while she was unconscious, according to Wilfred Okoye, the family’s lawyer.

After learning of the autopsy, the pastor allegedly admitted to drugging her to end her pregnancy.

The pastor married Chioma before the deceased’s funeral.

She was buried in Umuahia, Abia, on August 31.

Her obituary placard now includes the pastor’s name, indicating he married her.

Below are videos and pictures of her funeral and burial service: