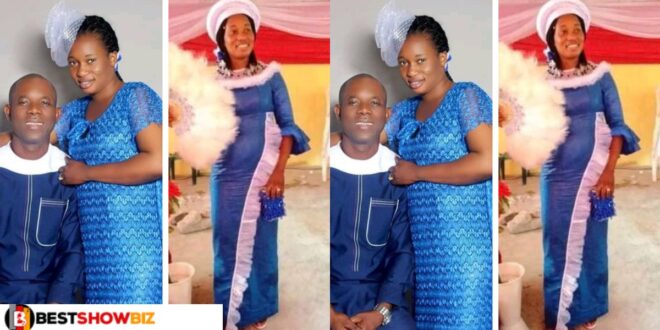 Pastor arrested for allegedly k!lling his wife over a fight

According to Instablog9ja, family sources told journalists that the incident occurred on Tuesday, November 9 in their home at Mbodo Community, Aluu, Rivers State, following a disagreement over fees payment at his wife’s school.

The School was allegedly founded by the late Solution prior to her marriage to the Pastor in 2012. According to reports, the trouble began when Solution confronted Amadi about why he escorted some of her school’s students out of the classroom for failing to pay their school fees without first checking their records with her.

Odinaka Opurum, Solution’s elder brother, said his now-deceased sister felt embarrassed when the affected parents began calling to complain about her husband’s actions. “The husband went to the school and began driving students away for allegedly not paying school fees.”

When the wife’s parents called to ask why she drove their children away after they had paid, she told them not to be upset because she would find out from her husband. When she arrived at the house, they began arguing again, and the husband began assaulting her.

He then strangled her until she collapsed and went unconscious. When he noticed she wasn’t breathing, he rushed her to a clinic near their house, where the clinic confirmed her de*d and referred him to UPTH for confirmation.

Read Also  Bismark the joke shows off his adorable kids in new video.

Instead of taking her to UPTH, he took her to his house, wrapped her in a wrapper, packed some clothes in a bag, locked all the doors, and attempted to flee.”

Her brother also stated that this was not the first time Amadi had to assault his sister. He stated that it had been recurring and that his sister, out of love and as the marriage counselor in their church, had decided to endure in order not to set a bad example for young girls. He stated that his family was looking for justice. The deceased left four children behind.