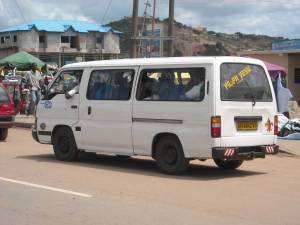 A passenger beat up a Trotro mate because he wouldn’t lower his transportation prices, even though there was a 15.3% reduction across the country.

The Road Transport Operators Association and GPRTU announced a 15.3% cut in transportation fares, which went into effect on Monday, December 19, 2022.

As was to be expected, there was disagreement among some trotro drivers and passengers about transportation rates.

In a video that has gone viral on the internet, a passenger can be seen arguing with a Trotro buddy in the car about his refusal to cut the fare.

The passenger was anticipating change after giving him his money, but the mate refused to give him any. He vented his rage on the mate and gave him several beatings.