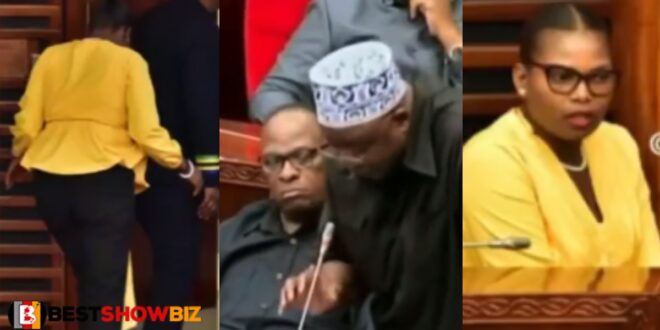 A female Tanzanian female MP was expelled from parliament for wearing a pair of tight, alluring trousers, according to some.

Speaker Job Ndugai booted out Momba MP Condester Sichwale on Tuesday, June 1, after another MP complained about her attire.

According to Global Publishers, Nyang’wale MP Hussein Amar, who is from the same party as Sichwale, shouted out against her attire shortly after a question-and-answer session.

Amar could be heard protesting against his colleague in a video widely posted on social media, stating that the parliament was a reflection of society and that they needed to provide a good example.

“Parliament is a reflection of society and Tanzania, and some of our sisters are legislators dressed strangely. What are they displaying to the rest of society?” The remainder of the room erupted in applause as Amar spoke.

Read Also  Why Are You Killing Me – Kuami Eugene Feeling People Are Sleeping On Him Already?

Speaker Ndugai requested that he specify the person he was referring to, which he accomplished by giving directions and describing her attire is color, but without saying her name.

Ndugai gently requested that the female MP leave and dress appropriately before returning to parliament.