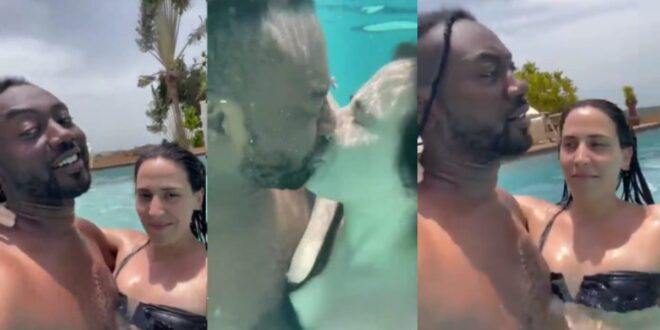 Fans respond as Pappy Kojo smooches with a white lady inside the pool.

He recently launched his debut song, titled “LogoII,” which has received over one million views on multiple music channels.

Pappy Kojo is seen in a video with a fan with an alleged white girlfriend inside a swimming pool, rather than visiting radio and television stations to promote his song.

“Ei, I had no idea love could be so good oh” he said

A twitter user pounced on him, advising him to spend his time visiting the media and promoting his song rather than having fun.

Popularly known as the webmazta; Cobby Collins is an established web designer, a computer instructor, and content creator. You can contact him via email [email protected]l.com or via Whatsapp only on +233204875306