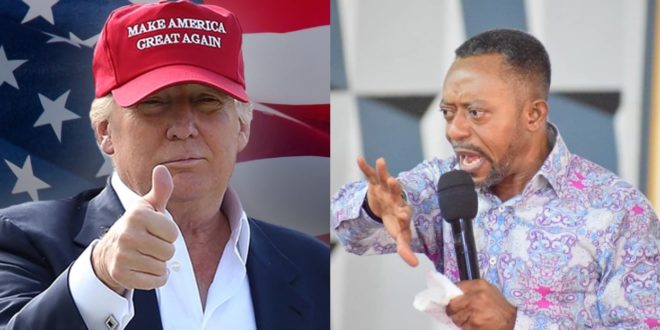 the founder and leader of Glorious Word Power Ministries, Reverend Isaac Owusu Bempah has prophecied that Donald Trump will win the elections of the United States of America.

the man of God during his prophecy on the 17th September said;

“God follows elections and particularly, the US, He is very interested. Trump fulfilled a prophecy so God is very pleased with him. Archbishop Duncan Williams informed Paula Whyte about my prophecy and she also told Donald Trump.

“So they acted on it and even called me to pray for Trump. We gave him some spiritual directives and he followed them”.

“What he lost in the spiritual realm has been returned to him and if God permits, he will win the US elections. We will keep praying for him. A win for Trump will be good for the Christian faith and he will help expand the faith”.

To those who do not believe in Owusu Bembah’s prophecy, he added; “If someone doubts my prophecy, then he or she hasn’t followed my prophecies. I said on Metro TV in 2016 that Trump was going to win and he won. I made prophecies about Congo elections and it came to pass”,

mean while, the 2020 elections of the USA ongoing, voting is done and counting is ongoing while experts predict that it will take three days for the winner to emerge.