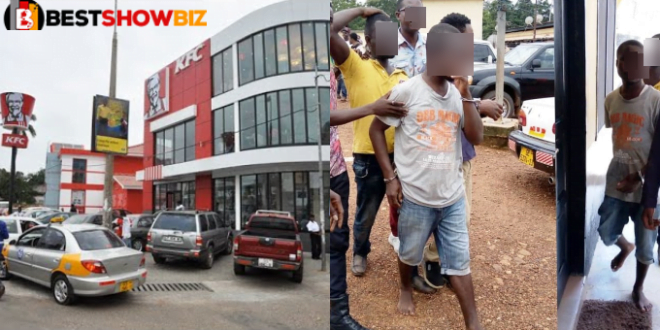 Osu: Armed Robbers run into OSu KFC to seek shelter from angry youth who wanted to beat them to death

In a video circulating on the internet, a group of armed robbers fled to Osu KFC for refuge after being chased by neighborhood teenagers wielding dangerous weapons.

The armed thieves were apparently apprehended by neighborhood youngsters who delivered swift justice, but they managed to flee, saving their lives.

Following a failed robbery attempt in Osu, these yet-to-be-identified thieves had no choice but to flee to the KFC for safety.

According to reports, the thieves demanded that the police come for their intervention because they were furious with the neighborhood guys, who they feared might even end their lives.

Read Also  "A day without you is like a day without the sun"- Abeiku santana praises his wife.
Share