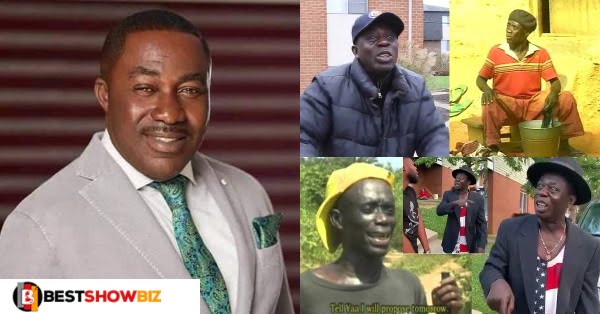 Judas was an actor who worked on films with Santo until he died. In fact, when discussing legends in the Ghanaian film industry, they must never be overlooked. They were a hit with Ghanaians.

This man was recently interviewed on Kwaku Manu’s Aggressive Interview, where he discussed his life problems. He is now alone in a foreign country, and he is very lonely.

But now that he’s in Ghana, he has nothing to work for.

Read Also  Referee beaten by fans and loses all his teeth in a division one match over bad officiating.

According to him, was the one who assisted Osei. Despite the fact that he was once very poor and is now wealthy, he has forgotten everything he and Santo did for him.

He claims that when they were famous in Ghana, they used to make audio cassettes for Osei Kwame Despite to sell and make money.

He was also one of those who came up with the idea of Osei Kwame Despite establishing the peace FM that we now hear of today.

Kwaku Manu, therefore, begged Judas to ensure that the message reached Osei Kwame despite the fact that he is capable of doing more than just taking care of him.

Osei Kwame Despite has been doing a fantastic job for the needy and jobless, and he may have simply forgotten about him, but if he remembers him, he can assist him.