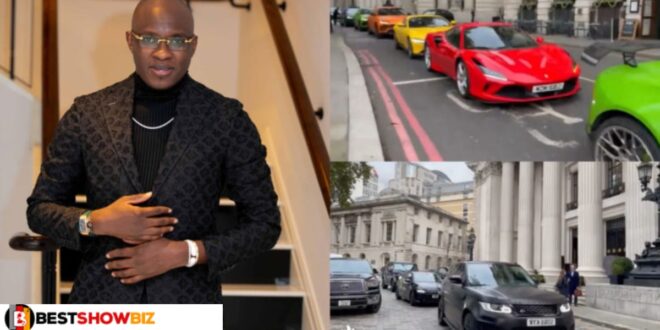 “Only poor people are bitter and envious of the rich”- Pastor tells congregation after his kids drove expensive cars to church.

Tobi Adegboyega, a preacher, took to Facebook to share a video of his “sons and daughters” arriving for the church in a convoy.

On Thursday, November 11, he celebrated his 41st birthday by posting multiple videos to Facebook.

One of the videos shows a line of luxury cars waiting for him to drive them to church on a London street.

He added that he is distributing the video to encourage and that anyone who is offended by it is not a supporter of good things.

He went on to remark that his children had worked exceedingly hard and that the fancy cars on display are the fruit of their efforts.

Read Also  Funny face pens down sweet message; signifying his peace with Lilwin is for real.

“How many Lambos can you spot in the video?” he captioned.