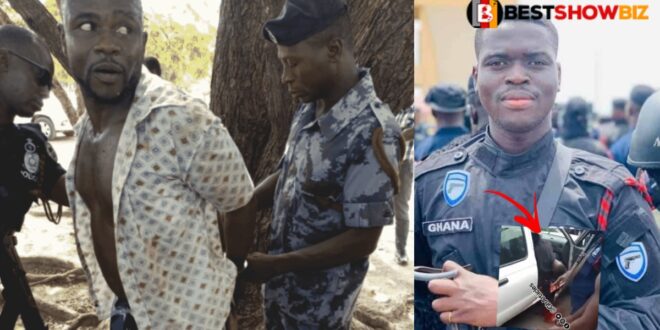 According to information we have obtained, one of the suspected perpetrators of the Korle-Bu bullion van robbery has been apprehended by Ghana Police Service troops.

On June 14, Ghanaians were shocked to learn that a bullion van driver, a police officer, and a pregnant woman had been killed by gunmen.

A bullion van driver and the police officer guiding the bullion van, as well as a pregnant woman who was at the site during the shooting by the unknown shooters, died on the Korle Bu stretch, according to a post posted by Ace Journalist Afia Pokua.

Unknown shooters are thought to have ambushed the bullion truck in an effort to rob it, killing three persons on the spot.

“Shooting on Korle Bu road,” Afia stated on her Facebook page. The driver of a Bullion van, a police officer, and a woman were all shot and killed. Chaos. Ghana will be saved by God.”

Photos that have gone viral on social media show a man being handcuffed by a police officer. Although the police have not publicly stated anything about the arrest, many believe he is one of the suspects.