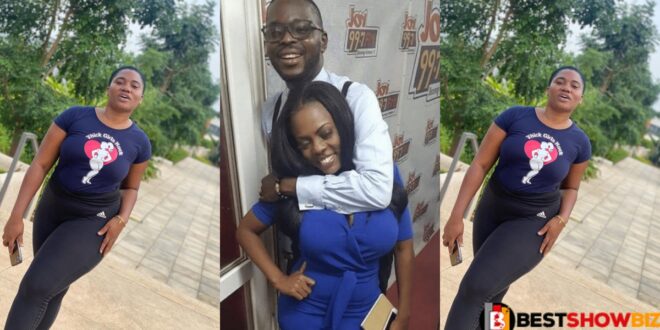 A flashback photo of the couple has appeared online only days after former TV3 anchor Abena Korkor raised feathers by stating that on-air personality Kojo Yankson had slept with Nana Aba Anamoah.

Abena Korkor sparked outrage on social media a few days ago when she updated her infamous list of guys she had slept with. She said in the context of her current exposé that one of her “victims,” Kojo Yankson of Multimedia, had also “knacked” actress Lydia Forson.

A vintage photo of Nana Aba Anamoah and Kojo Yankson joking about in the Joy FM studios during working hours has surfaced only days after she delivered the news, provoking wild responses on social media.

see the photo Nd some rections below;

below are some comments;

yeboah4286 – Those asking for evidence this is pure imperacal evidence.

theresabukari3 – we go fight oo.. is that Kojo Yankson l listen to him paa ooo his morning show on Joy . Mr Lover Lover

lot.more_ – So Lydia forson dey chop some er  now that we know she is also in cue hallelujah she won’t come and yub again….