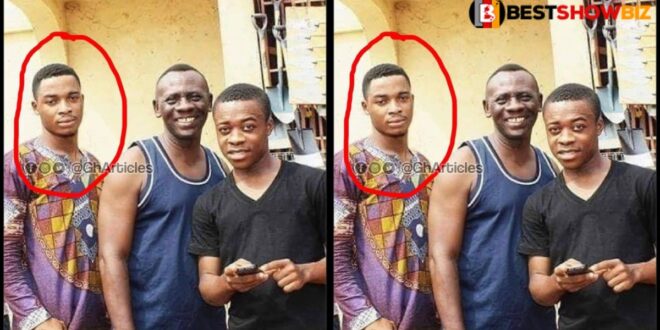 When Twene Jonas was in Ghana, an old photo of him standing alongside famed actor Akwasi Boadi alias Akrobeto has surfaced online.

Jonas rose to stardom. With his back-to-back severe criticisms of Ghanaians in relation to African leaders, he has dominated the Ghanaian social media landscape.

After going hard on traditional leaders, particularly Asantehene Otumfuo, for their lethargic response to the fight in Galamsey, the “Glass Nkoaa” man earned the fury of numerous Ghanaians living in America, where he is based.

Twene Jonas has stated that he will not give up on what he has started, which is putting pressure on leaders, until he sees the desired transformation in Ghana that comes with progress and development.

Read Also  Adjetey and his wife stun in new adorable photos to commemorate 14 years of marriage.

This photo of him in Ghana may demonstrate why he has been pressing for change in the country.

He has long maintained that Ghana has immense prospects, but that the people are currently suffering as a result of failing leadership.

His message appears to have struck a chord with the youth, as he attracts thousands of viewers every time he goes live on social media, particularly Facebook.