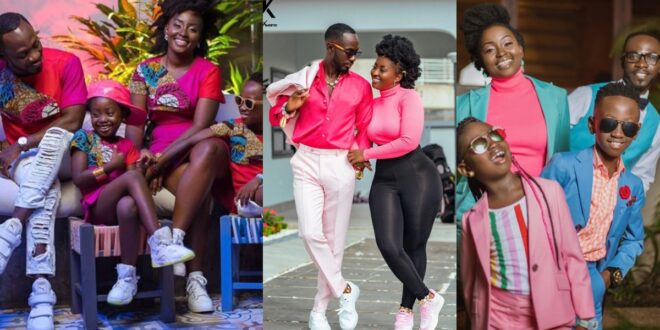 Okyeame Kwame has made marriage beautiful and exciting on these six occasions.

Average people dream to have a star marriage and it is enviable. celebrity marriages  will make all the headlines, but they rarely last as long as planned.  Celebrity relationships have always started out caring and lovely, but the ending has always been bitter.

Okyeame Kwame, a former member of the Akyeame party, has been teasing and melting our hearts with lovely family images. His marriage still seems to be thrilling and fresh. Celebrity partnerships have a reputation for being short-lived in contrast to most forms of relationships. There are a variety of reasons that lead to these breakups. Traveling and time can be the trigger of a marriage breakdown if you’re a singer like Okyeame Kwame.

Respect to Okyeame Kwame for maintaining his marriage with his wife Annica and two beautiful kids, Sir and Sante, who are already following in his footsteps in music. Both of them have put in a lot of work to get to this stage. Their children have had the best parents in the country. Humility had to have played a big part in that .

There are many other celebrities who have began the thrilling and glamorous process of beginning a family. Sarkodie and Stonebwoy can also be listed. Let’s hope they get to this point in their marriage and even move by.

Take a look at how Okyeame Kwame, aka the Rap Dacta, has made marriage more glamorous and exciting: