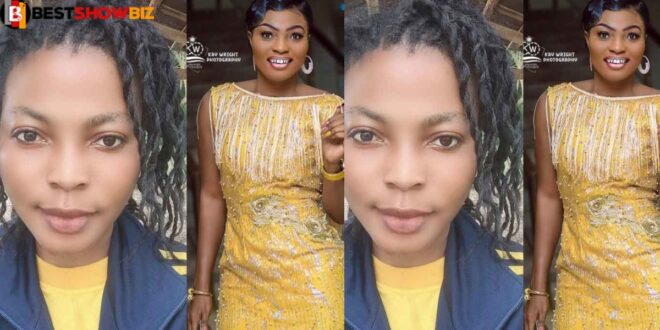 Odo Broni exposed on live radio by her classmates after lying she completed top-class SHS.

Abigail Amoah Konadu, known for her role as Odo Broni on screen, is trending on social media after she was caught on live radio lying about the school she attended.

The actress was in the studios of Despite Media’s Hello FM in Kumasi on Saturday, August 28th, 2021, for an interview with Dave Hammer (Host) on Hello Entertainment Review, one of the greatest Showbiz shows on radio.

Odo Broni, who sat in the studio looking stunning, talked a little about herself and her acting career; she revealed how, when, and where she began acting, as well as her plans for the future in this chosen profession.

Read Also  Regina Daniels dazzles in new photos, says taking care of her son is all she does

The host, Dave Hammer, asked her a few minutes into the conversation what Senior High School she graduated from. The actress swiftly responded that she graduated from Afia Kobi Ampem Girls SHS, but she did not specify the year.

A call came through shortly as she was about to end the interview, alleging that the actress did not complete the institution she mentioned, but rather Barekese Senior High School.

The caller, who identified herself as Vanessa Appiah (an old student of Barekese SHS and the wife of Nana Yaw Akuoko), said she knew Odo Broni well and that he was even her school mother back then.

Nana Yaw Akuoko is Otumfuor Osei Tutu’s Assin Hene at Abuakwa Sepaase, one of the popular towns in Kumasi in the Ashanti Region.

Some of the show’s devoted viewers said Odo Broni lied about the school she completed right after the call in the comments section of the show (Hello Entertainment Review), which was simultaneously streamed live on Facebook with hundreds of people watching.

They claimed that Odo Broni graduated from Barekese Senior High School in 2013.