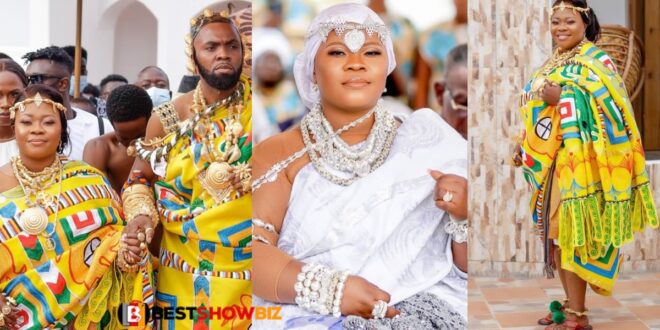 Obofowaa in the photos was seen posing for shots dressed as a queen or queen mother.

She was seen with her husband at his enstoolment, decked with gold jewels.

She was spotted holding Obofour’s hand while attending the magnificent durbar given in their honor, beaming with her customary smile.

As we reported, earlier, Reverend Obofour had been enstooled as a king in Accra.

sharing the photos, the wife of the man of God wrote;

“Only a KING can attract a QUEEN.
And only a QUEEN can keep a KING focused .

Over the weekend my husband and I was enstooled in the Ga Traditional Area.

My Husband is now Nii Adotey Gyata the first , Chief of Asante’s in the Sempe traditional area.

Would be performing my Queenly duties as Naa Adukwei Shikaky3 the first. Love”