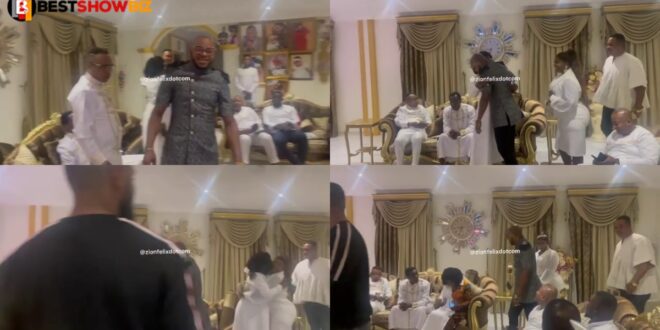 Is there a more dramatic change in a relationship between two Ghanaian superstars than Obinim and Obofour?

These were your worst adversaries a month or three weeks ago. They’re almost best friends now.

A video shows Obinim and his wife greeting seated dignitaries before the party.

He showed here to thank the Obofour family for attending his father’s burial last weekend.

Obinim recently lost his father, which caused the two men-of-God to reconcile.

Even though they were once bitter foes, Obofour called Obinim on his TV station to offer condolences.

Obofour’s move ended their feud, and he went on to attend Obimin’s father’s funeral.

In the future, the two self-proclaimed angels among pastors may have a wonderful friendship or even alliance.

See Obinim in action below…