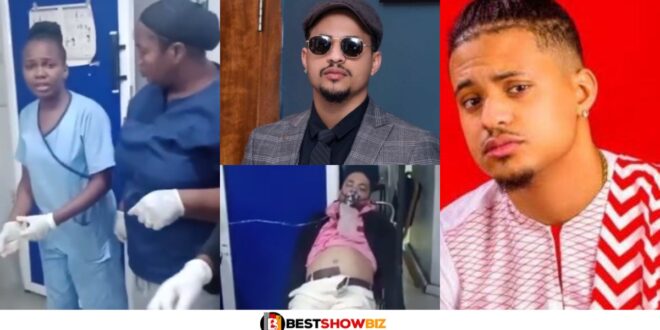 ‘Nurses were taking videos and pictures instead of taking care of Rico after his accident, they k!lled him’ – (watch video)

Nurses can be seen standing aloof in a video taken at an unidentified hospital, as if they are unsure what to do for the Big Brother star.

Rico, who appeared to be unconscious and injured, was placed in a wheelchair and given an oxygen mask to help him breathe.

In several reactions, netizens stated that it was Nigeria’s failed healthcare system and unethical professionalism that killed RicoSwavey, not the accident.

According to one user; “Very sad news, truth Is this could be anyone of us. Our health care failed him at the most critical time.”

Another cited that, “The Health Care didn’t only fail him, he was taken to the Hospital late. His friends were taking Videos and picture pieces of evidence instead of helping the nurses to lift their Friends to that Bed That’s the most Insensitive thing tbh.”

“Pray for safety in Nigeria. In a case where you need urgent assistance, people who are around you may be more interested in other things. RIP,” a third added.

Health attendants were just making videos and laughing while someone was dying 😭 Sorry rico #ricoswavey pic.twitter.com/NyFR1LPqke