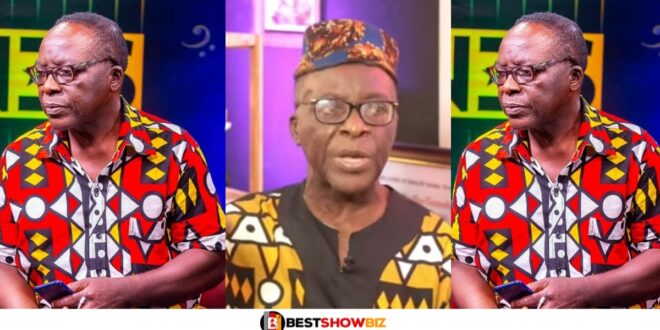 Amankwah Ampofo, a senior actor and broadcaster, has spoken out against how certain experienced actors and artists are treated in the nation.

When an elderly actor or singer reappears, it is usually to beg for money to continue his or her livelihood or to recover from illness.

He stated that as a result of this, anytime an elderly actor or singer approaches individuals in positions of power, they are ignored because they believe they are begging.

Amankwah Ampofo related an event in which he phoned a GBC worker whom he had mentored and assisted in the sector.

He stated that this guy repeatedly refused to answer his phone until he dialed a different number.

Read Also  " I will take the law into my own hands if the boys are not given life in prison"- father of k!lled 10-year boy speaks (video)

He said he merely wanted a piece of information from him, but the individual mistook him for a money call.

He claimed that he just had a stroke, but that he was able to care for himself since he had planned well when he was younger.

He argued that not all senior performers and musicians are poor and that sometimes their calling is to serve others rather than to make money.