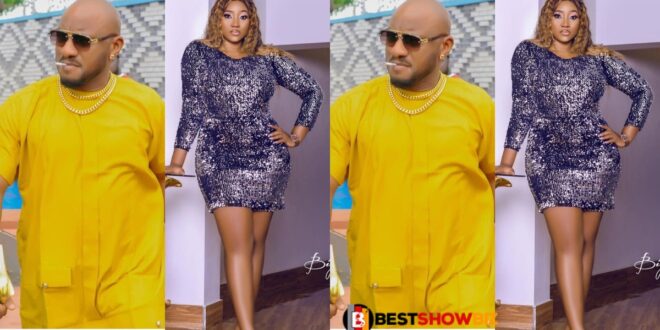 Nollywood is ablaze with reports that star Yul Edochie has given birth to a kid with another Nollywood actress.

According to rumors, Yul and the aforementioned lady have been dating for a long time and are enjoying an amorous affair that many people are aware of.

Judy is the actress’s name, and she recently gave birth to Yul’s baby.

“People on the gram can simply not believe that an actor as respected as Yul could be unfaithful towards his wife. Many of them have expressed their disappointment with others saying there is no truth in what Cutie is saying.”

Cutie sarcastically shared another photo of Yul and Judy, writing:

“Handsome gangster, sharpshooter with his gorgeous mistress … Congratulations to the newest Nollywood parents. I think our new baby will be so gorgeous cuz parents are very good looking I must confess“

Yul and his wife have been married since 2004. He claims he was married when he was only 22 years old and had no money. He has always emphasized how his wife backed him up and stayed by his side until he succeeded. He acknowledges it was not always easy, so the fact that he is now sleeping with other women and has given birth to another kid when he already has four children with his wife is startling.

His father, Pete Edochie, is thought to be displeased with his son.

We are eager to hear what the actor has to say about receiving a fifth kid, but he has not reacted to any of them.

below is the posts;