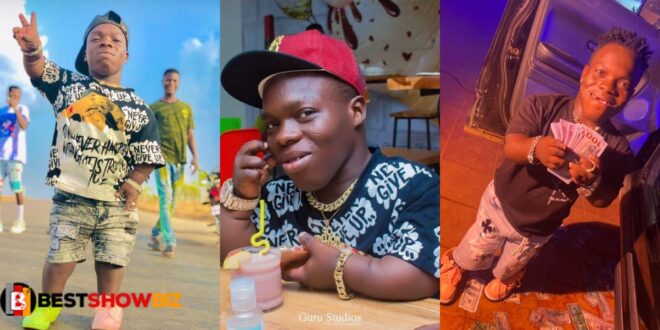 “No mallam or priest can use me for sacrifice”- Shatta Bandle

Shatta Bandle, a diminutive comic personality, put to rest fears that he might be used as a sacrifice.
On Okay FM, he was interviewed by Abeiku Santana and discussed a variety of topics.
However, his interview was overshadowed by his amusing English speaking skill.

As he strives to articulate himself in English, Shatta Bandle left Abeiku Santana and others in the Okay FM studios laughing out loud.

Shatta Bandle exploded onto the scene, claiming to be Africa’s richest man. His lavish lifestyle, which he flaunts on social media platforms, has led many to question his source of income.

Not to disparage him, but his Small and Diminutive personality arguably made most people fall in love with his amusing behaviors while also fearing for his life because it has been reported that his kind of individuals are what lesser gods seek as shrine sacrifices.

When asked about reports of his being used for sacrifice in the future, Bandle, who finds the notion amusing, argues that no shrine owner would dare to use him for any kind of sacrifice.

Unfortunately, the clarity of his English language prevented him from making a clear statement.