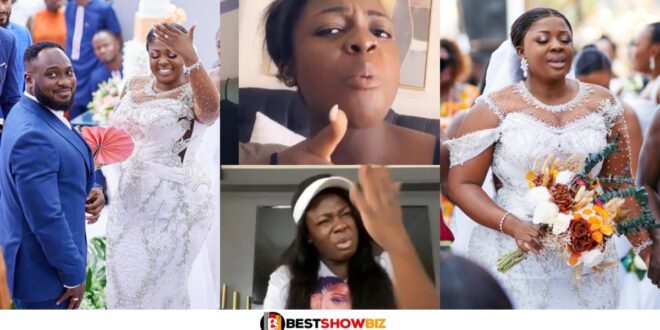 “No friend of mine should tell me how to live my life with my husband, you will see my bad side if you do”- Tracey Boakye warns her friends on WhatsApp

Tracey Boakye has explicitly cautioned those who are in her inner circle not to give her advice or bring to her notice things that others say about her on social media, regardless of whether those things are nice or negative.

Evidently, Tracey Boakye has seen all of the comments that have been posted on social media, as well as the responses that have been sent to her email by well-meaning friends who are instructing her on how to handle her current situation.

In her response to all of the hubbub, the mother of one stated that she is mature enough to take responsibility for her actions and that she will no longer tolerate people who want to intrude into her privacy.

Tracey issued a stern warning to the people in her contact list not to meddle in her personal affairs in a series of posts that were visible on her WhatsApp status.

“Attention! To all my WhatsApp contacts here, if u see anything on social media or hear anything negative or positive about me. DON’T COME AND ADVICE OR TELL ME. I don’t need it!l! Use that advice for yourself! Don’t come and destroy the good relationship we have, by making me tell u NONSENSE! Keep your advice and let’s respect ourselves! THANK YOU”

She gave the impression that anyone who would earn her fury would be sorry to count her as a friend or confidant in the future.

Tracey claims that because she is successful, wealthy, and a public figure with influence, she is used to receiving criticism from “foolish individuals living in their single rooms.” As a result, she is prepared for this criticism.

However, she claims that she does not anticipate that her friends will focus on those comments in order to provide her with advice.

More screenshots of Tracey’s warnings that she posted on her WhatsApp status are included below:

While there have been widespread rumors that she stole her husband from her godmother Vivian Jill, the legitimacy of the marriage has been called into question, and some people have even predicted that it will end in disaster.