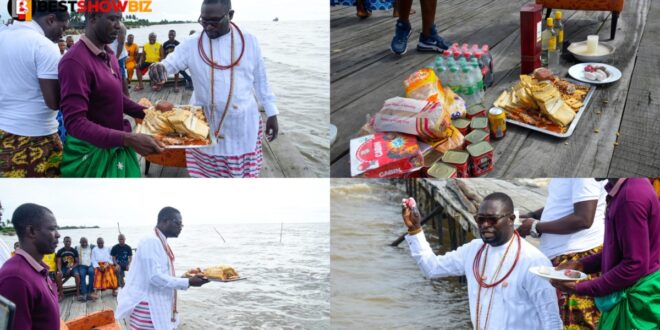 Following the loss of one of the traditional seats, a Nigerian wealthy businessman went to the river in his town to offer food and drink to the gods as part of a yearly ceremony.

After visiting the “gods of the river” with his supporters on September 4, Ayiri Emami brought various meals and beverages to offer as thanks to his deity on the following day, September 5.

When the Olu revalidated the chiefs on September 2, Ayiri was dismissed as Prime Minister of the Kingdom, despite the fact that he was opposed to Tsola Emiko’s coronation as the Kingdom’s twenty-first Olu (ruler).

Even after losing Ayiri Emami, he has found every excuse to visit the gods and make sacrifices in the hope that he will be selected by them (the gods) to represent and lead his people the next time around.