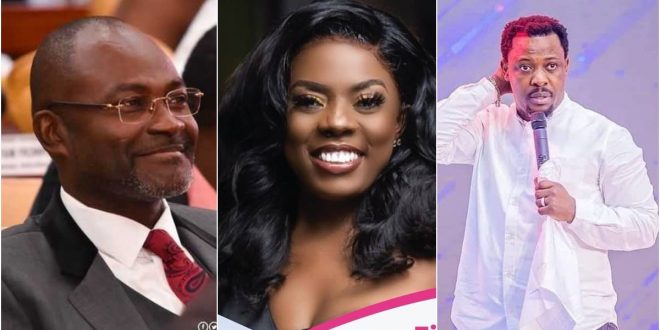 The MP for Assin central, Hon. Kennedy Agyapong has yet made another revelation about the founder of Prophetic Hill Chapel, Nigel Giesie in his journie to bring all fake pastors in the county to light.

taken to net 2 tv recently, Kennedy revealed that Prophet Nigel Gaisie  wanted to sleep with celebrated broadcaster Nana Aba Anamoah as he has been doing with most female celebrities.

according to Kennedy Agyapong,  Nigel Gaisie called Nana Aba and told her that God has revealed to him that there was an evil thing planted in her father’s house at Cape Coast so she should come and see him. meanwhile, it was planted there by one of Nigel Gaisie’s former associates as instructed by Nigel.

Kennedy concluded that because Nana Aba was a deep thinker, she didn’t fall for Nigel Gaisie’s trap and he respects and commend her for that.