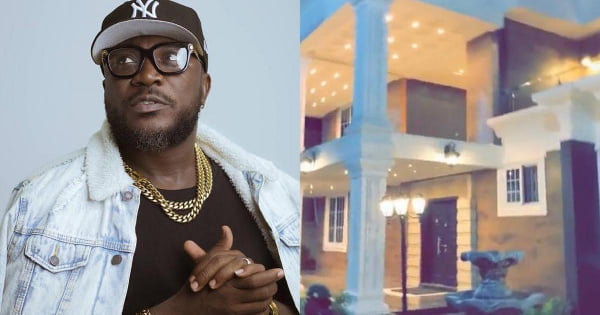 Nhyiraba Kojo flaunts the inside of his 9-bedroom mansion to show he is richer than Shatta, Sarkodie and Stonebwoy combined

Nhyiraba Kojo, a hiphop rapper and entrepreneur, owns a plush mansion and a fleet of luxury cars, as seen in this video.
Nhyiraba Kojo is one of the few people who enjoys music and, despite this, he manages to make money in a variety of ways, much like active musicians.

About the fact that Nhyiraba Kojo is not a musician, he has claimed in several interviews that he is a businessman.

Nhyiraba Kojo recently made a bold assertion, claiming to be wealthier than Sarkodie, Stonebwoy, and Shatta Wale, among other top Ghanaian musicians.

According to him, those three Ghanaian musicians are not even similar to him in terms of wealth.

In an interview, the bankroller of the Nhyiraba Kojo City Night Club said that these top musicians lack the financial resources to contend with him.

Nhyiraba Kojo’s mansion features a huge swimming pool, gorgeous gardens, and a Range Rover and a Chevrolet Camaro, to name a few.