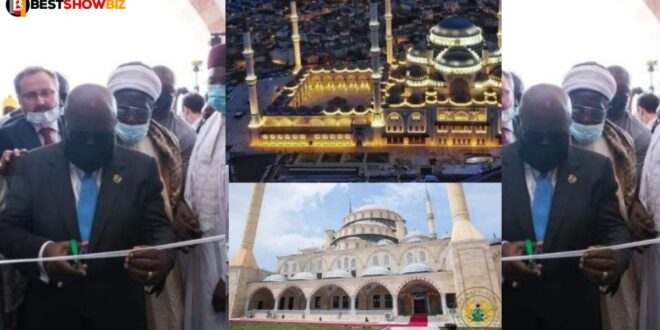 Newly constructed National Mosque can take up to 15,000 people

President Akufo-Addo has dedicated the National Mosque of Ghana Complex to our nation’s Muslim Ummah.

A big mosque, the second-largest in West Africa, an office building for the National Chief Imam, a clinic with laboratories and a pharmacy, a library, and a morgue are all part of this complex.

The Ghana National Mosque is complete and will be officially opened today. The Turkish Hudai Foundation built the project, which is expected to cost $10 million.

The 15,000-seat mosque complex sits on a 10-acre plot of ground and includes ancillary facilities such as the National Chief Imam’s office and house, a research complex, a senior high school, a clinic, an administration building, and a conference center.

When the Muslim Umma in Ghana could not build the mosque on their own, President John Dramani Mahama intervened, sending the National Chief Imam to Turkey to strike a deal with the Turkish government.