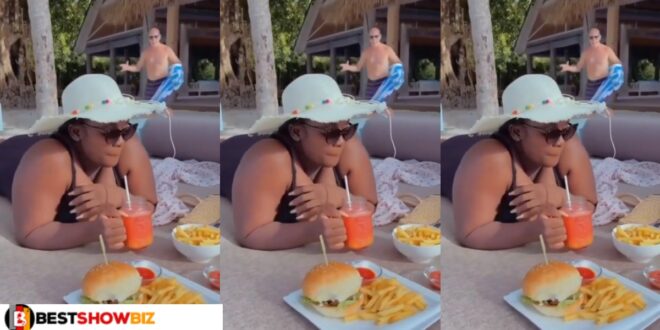 New video: Tracey Boakye’s sponsor; ‘Papa no’ who is a white man has finally exposed

East Legon landlady, Tracey Boakye has recently been putting a lot of pressure on her fans, owing to her online antics.

The actress is not one to keep things low-key; she makes a point of flaunting her wealth to show haters that they are not on her level.

Tracey’s alleged trip sponsor accidentally appeared in a video she shared on her page.

Tracey Boakye is seen sipping her drink and munching fries while the unidentified critically acclaimed sponsor, a white man, runs for her with his arms spread as if he missed a hug.

Most netizens are convinced beyond reasonable doubt that the white man who appeared in the footage has been lavishing cash on Tracey Boakye, including her recent expensive trip, based on the content and comments the footage has gotten on social media.