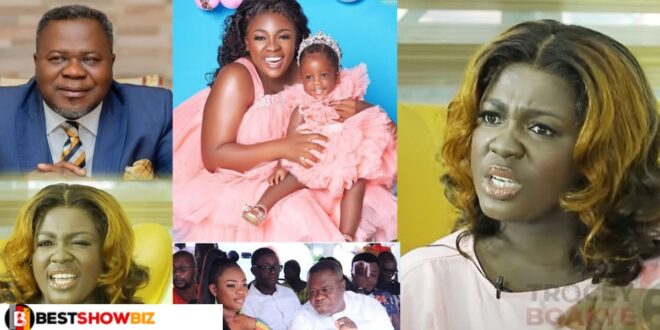 Tracey Boakye, a Kumawood actress and movie producer, has finally spoken out about her relationship with Dr. Kwaku Oteng.

Tracey Boakye claims she has never slept with Dr. Kwaku Oteng and has never had a child with him.

She apologized for attacking her critics who accused her of sleeping with Dr. Kwaku Oteng on her own Youtube channel in response to the distressing rumors.

Tracey Boakye has stated for the umpteenth time that she has had no affair with Dr Kwaku Oteng, stressing that Nana Akua Nhyira’s biological father is known, despite the fact that he is not the social media type.

Tracy Boakye, a woman who has suffered greatly at the hands of internet trolls, has advised her detractors to find something more productive to do with their time because their insults against her are pointless.

After rumors went viral that he fathered Tracey Boakye’s daughter, Dr Kwaku Oteng was dragged into the controversy.

He is one of the ‘powerful’ individuals, and along with former President John Mahama, who has been linked to Tracey Boakye.