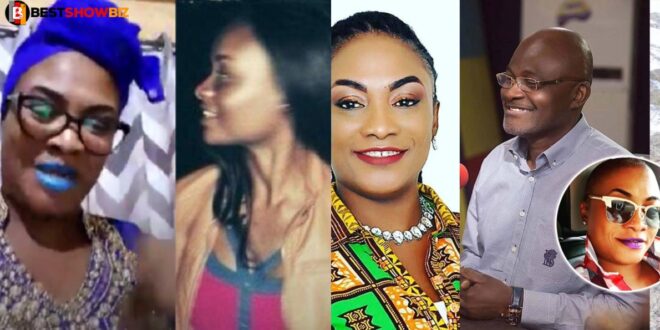 Moira Dawson-Williams, one of Kennedy Agyapong’s baby mamas, has cursed the Assin Central Member of Parliament for abandoning their daughter.

Moira Dawson-Williams was seen conversing in the passenger seat of a car in a Facebook video obtained by Bestshowbiz.com.

She claimed that the majority of the things the politician said about their daughter, Anell, were lies, which prompted her to address him.

Moira further said that she did not expect Kennedy Agyapong to think of Anell as his daughter and that if he did, thunder would strike him.

Kennedy Agyepong, according to Moira Dawson-Williams, failed to fulfill all of his fatherly responsibilities and therefore had no option to accept Anell as his daughter.

Read Also  " fear Not, For He Has Redeemed You" - Bill Asamoah Preaches The Gospel (Screenshot)

She stated that, contrary to expectations, Anell’s school fees have not been paid by the MP since she was born.

in her own words, Anell’s mother said;