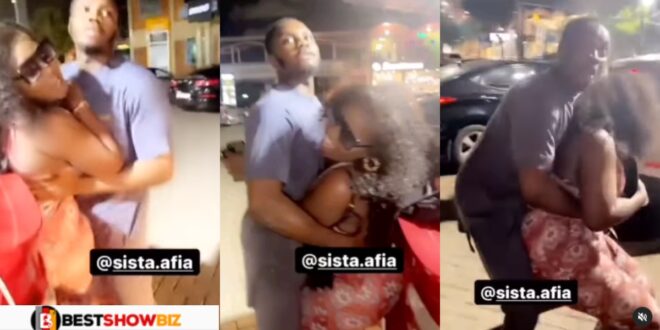 Bernard Fiifi Yankey appeared to be joking with Sister Afia in the video, but he was actually grinding her huge newly acquired buttocks and cuddling her soft body.

Sister Afia also acted as if she does not approve of what he is doing, but you can see her hand around Yankey’s waist.

At one point, the comedian grabs the singer by the car and performs an ‘atopa’ movement in front of Sister Afia.

He grabbed her in such a way that it was clear he was really feeling her massive melons as well.

Read Also  "I slept with a Boss to secure a job for my boyfriend, but he broke up with me"- Lady cries

In the video, Fiifi Yankey is heard jokingly saying, “I am going to marry Sister Afia. The marriage will come on, so let me feel her new body.”

Also in the video, Sister Afia was yelling sexily and referring to the name of the comedian.

The moment Sister Afia attempted to run, Yankey snatched hold of her waist and began with another “atopa” at her enormous backside.

This happened in a car park while the two of them were having a sweet moment together.