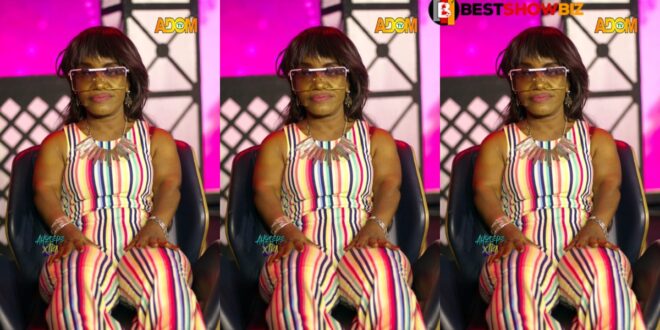 After a long sojourn in the United States of America, veteran actress Belinda Naa Ode Oku, better known in entertainment as Adwoa Smart, has returned.

On Saturday, June 27, the actress arrived in Accra to grace the studios of Adom TV for the always-entertainingAhosepe Xtra show.

Fans were caught surprised when Adwoa Smart answered questions with an American accent as she walked down the red carpet.

Sister Sandy had to acquire a foreign accent to keep up with Adwoa Smart’s vigor.

Adwoa Smart revealed that she had been in and out of New Jersey with her sister to get a taste of life in the West.

She signed autographs for her followers, including Sister Sandy, who asked for hers to be written on her back.