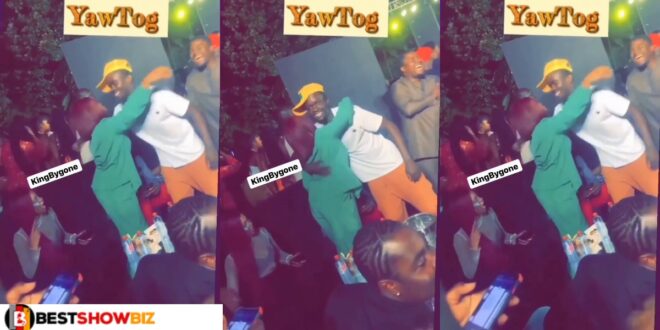 Gyakie and Yaw Tog, it appears, have been trending since yesterday.

When a video of the second Gyakie embracing Kofi Jamar and snubbing Yaw Tog was released at an event, the internet went crazy.

Following the release of the video, fans have been divided in their opinions on whether or not it is true, with many questioning Gyakie’s motivations for acting in such a manner.

Following a second viewing of the video, some people believe Gyakie was disrespectful of Yaw Tog, whereas others believe she was right to be disrespectful.

Following reports that Gyakie and Yaw Tog were feuding, the two hugged in the most recent video to debunk the rumors.

Yaw Tog and Gyakyie were among the celebrities who attended R2Bees’ “Back To Basics” album listening party in Accra on Wednesday, November 24, 2021.

Gyakie and Yaw Tog were the first to arrive at the album listening session.

When the latter arrived, he exchanged greetings with attendees before walking over to the seat where the “Song Bird” was seated and greeting them between Efya and KOD.

In order to demonstrate that they are on good terms, Gyakie, who was looking through her phone when Yaw Tog greeted Efya, raised her head and extended her hand, handshake the ‘Kumerican’ drill Lord and hugged him.