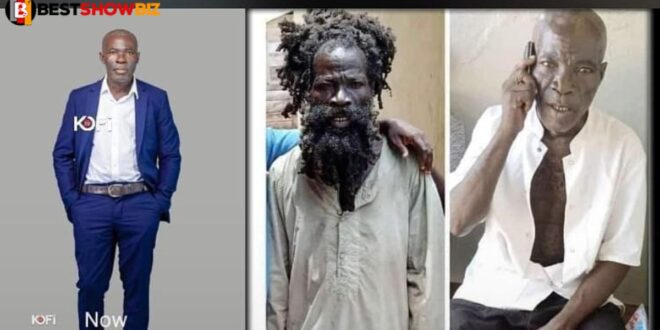 Only a few months after being hospitalized and treated at the Accra Psychiatry Hospital, the insane celebrity Mona Mobl3 has undergone a dramatic turnaround.

Mona Mobl3 became a nationwide phenomenon after recordings of the insane guy appeared on social media, in which he was giving good advice and claiming that it was other people who were suffering, not him.

After a series of interviews, Kofi Adomah, a senior media personality with Angel TV, reached out to him and took him to a psychiatric institution for treatment with the help of other well-meaning Ghanaians.

Well, it appears that the therapy worked! Mona Mobl3 has undergone a complete transformation and now appears to be quite attractive in fresh photographs that have gone viral.

Mona Mobl3 looks dashing in a dark blue suit, and social media users have been responding to the images.

see his new looks below;