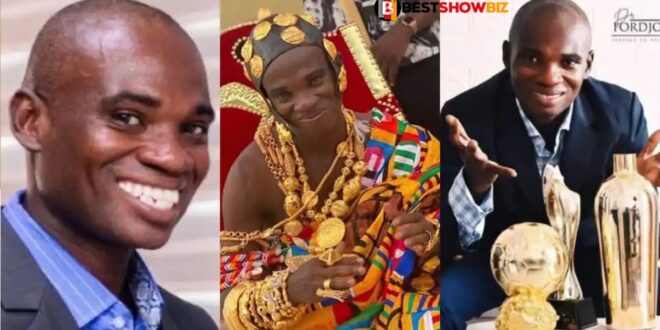 New Photos of Dr. UN crown as a King surfaces

Dr. UN, the notorious and phony UN Awards organizer, appears in a new photo dressed as a monarch.

Dr. UN is seen in the snapshot, which has been circulating on social media and found by Bestshowbiz.com, beaming brightly as if he had realized a dream.

He is clothed in complete royal regalia and glows in his vibrant kente, as well as his accessories, giving him the appearance of a perfect monarch.

A young man standing behind Dr. UN maybe his royal bodyguard, according to the picture.

Kwadwo Fordjour, who claimed to be a United Nations (UN) Global Ambassador, made news in 2020.

He also claims to be a doctor with a Ph.D. and has scheduled the 7th Global Leadership Service to Humanity Awards on August 28, 2020.

Fordjour presented plaques with the words “UN Kofi Annan Excellence Awards” engraved on them during the awards ceremony, in an attempt to establish a link between the scheme, the UN, and the late Kofi Annan.

However, it was eventually discovered that he was a fraud with no ties to the United Nations or Kofi Annan.