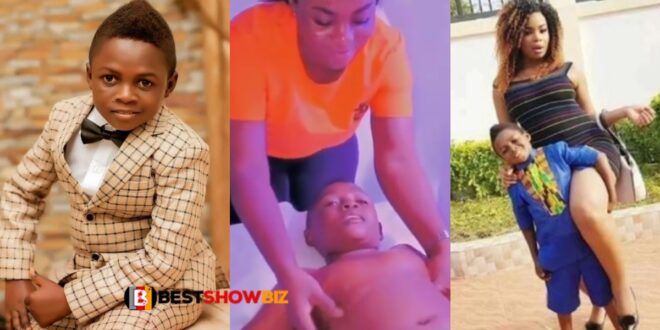 Samuel Dabo, also known as Yaw Dabo, a popular diminutive Kumawood actor, has posted a new video on social media having some fun with his alleged girlfriend, Vivian Okyere.

In the video, as we sighted, the actor is seen spending time with Vivian Okyere.

The actor in the video was seen resting on a bed without a shirt.

Vivian Okyere on the other hand was seen standing behind Dabo’s bed, wearing an orange t-shirt over a black skirt.

She delighted the actor by massaging him. During the massage, Dabo was overheard stating that anyone looking for a comparable treatment could go to Beauty Cage. By Vee, his sweetheart’s freshly opened beauty salon.

Dabo praised Vivian Okyere in the video, calling the massage “nice” and referring to her as “love.”