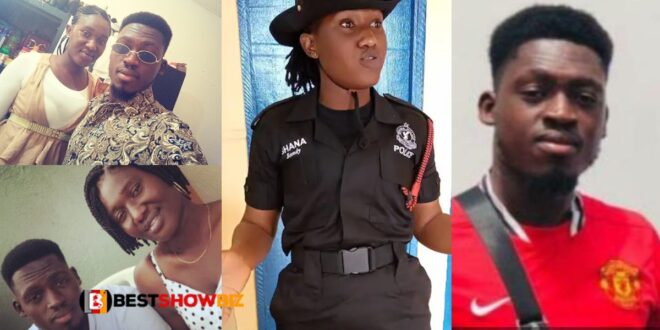 The story of the murder of police constable Sandra Asiedu is still in the news as new reports have emerged.

From new reports sighted by bestshowbiz.com, Louis Asante, the alleged boyfriend and killer of police constable Sandra Asiedu, reportedly attempted suicide, according to his father.

According to new accounts, Asante, who is said to be a goalkeeper, returned to Obuasi after committing the murder.

He attempted to hang himself at his parents’ house when he landed in Obuasi.

The deceased’s father, Victor Osei, verified Asante’s attempt on his life in an audio that has quickly gone viral.

He and the cops proceeded to Asante’s parents’ house and discovered a rope hanging from the ceiling fan and a bottle of weedicide in the room.

Sandra Asiedu’s shoes and clothing were among the other items discovered.

When the rope he tried to hang himself with tore, the suspect is reported to have run away.

And as we reported earlier, Asante’s father has been arrested to aid in the search for his son.

Below is the audio: