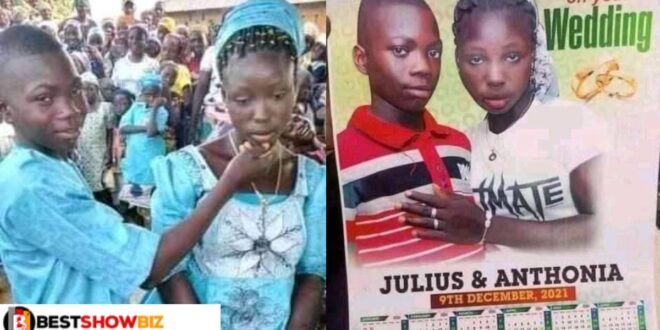 Netizens call for the arrest of parents after 11-year old boy and his girlfriend announce their wedding on social media.

Ghanaians are furious, with some calling on the newly-appointed Inspector General of Police (IGP), Geroge Akuffo Dampare, to arrest the parents of two teenagers who have publicly announced their wedding date.

In pre-wedding images, the two youngsters, who are barely teens, are seen inviting their friends and family members to save the date’ as they prepare to marry.

The photographs were shared on Facebook, and due to their age, they prompted a wide range of opinions. We have yet to determine if this is a true story or a joke of the year.

The wedding appears to have taken place, based on the evidence.