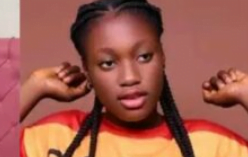 After a video featuring Nollywood teen actress Ifedi Sharon and a male coworker surfaced online, netizens had plenty to say about it.

Sharon was caught on camera on a movie set undergoing what appeared to be a rape scenario, in which one actor physically handled Sharon while she was lying on a bed.

Sharon posted a clip from a movie that hasn’t been released yet on Instagram. This got people talking about whether an actress her age (18) should be cast in such mature roles.

Captioning the video, she wrote

“THERE IS NO GREATER INHUMANITY IN THE WORLD THAN HURTING OR BELITTLING A CHILD. Directed by @cjezeugwu”

Check out some of the reactions below: