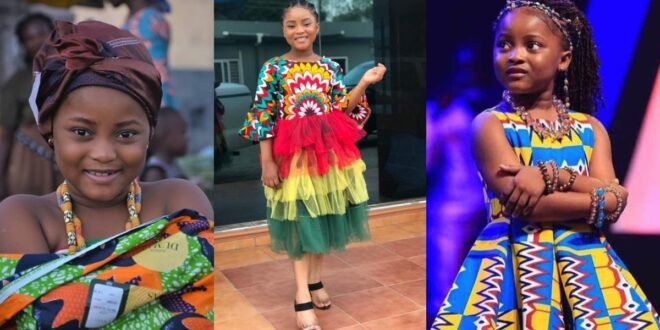 Netizens Blast Parents of Nakeeyat for bleaching her skin (photos)

Nakeeyat Dramani, the winner of TV3’s Talented Kidz for the tenth season, tends to be succumbing to an entrenched African inferiority complex as her natural chocolate color fades as she grows older.

The young, dark-skinned girl who enchanted Ghanaians is now a light-skinned kid.

New pictures of her have caused controversy on social media, revealing her in a more glamorous way.

When you compare and contrast images from her talented kidz days to today, it’s obvious that there’s something going on behind the scenes.

Since she’s too young, it’s doubtful she’ll make her own decisions on which pomade she’ll use.

Users on social media are already blasting her parents, who logically seem to be the ones responsible for her new look.

Check out Nakeeyat from Talented Kidz, then compare and contrast the two photos and describe what you think is going on…