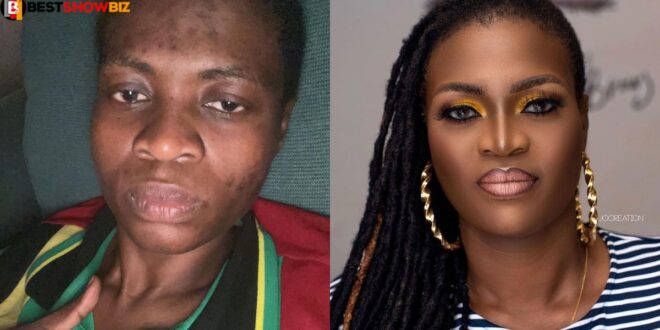 Ayisha Modi, the infamous socialite from Ghana, has released a photo of herself that does not look anything like the Ayisha Modi we are familiar with — and she claims that her adversaries attempted to use juju (black magic) against her.

Her Instagram profile was flooded with a snapshot of herself appearing emaciated and unrecognizable on Wednesday, September 15, according to her.

According to Ayisha, her assailants intended to kill her, but she deflected their juju and returned it to them.

She asserted that she had previously encountered a spirit and that she had dealt with her adversaries spiritually even while on her sickbed. She boasted about being a powerful lady and cautioned her followers to exercise caution when dealing with people they consider friends.

“Who them trying to kill?! This is Ayisha Modi your angel witch. Juju. I sent it back to them oooo. R.I.P brother D.J Adviser. Make them no try. You see spirit before? Even on my sick bed, I was given it to them back to back Arrrr woman is too powerful. Inside enemy paaaa ooo! Be very careful with those we call friends,” she wrote.

Ayisha Modi revealed that the photo was shot months ago when she was being targeted by “evil souls” on social media in an attempt to bring her down. She stated that she had returned it [juju] to the ‘bad souls’ in a plethora of ways and that her admirers will hear from her in the near future.

“Thanks to everyone for their prayers and support. It’s hasn’t been easy. But guess what we won. Allah over do. Even on my dying bed I still saved a soul. Am well oooo. This picture is months ago when evil souls in the media was trying to pull me down. I have sent it back to you guys in 100000 million ways. Try me again next time. All the audios they send to my Godparents about me Dey my hands. At the right time, very very soon u guys go hear am. Inside enemy. They are not humans so am I.”