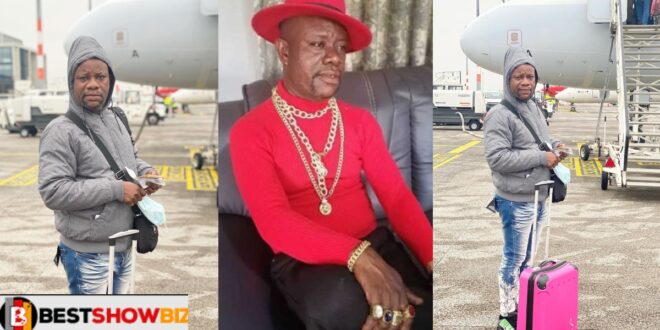 Controversial Nana Yeboah, a Ghanaian comic actor, is finally poised to return to Ghana, and the comments under a photo he uploaded at the airport are full of insults and threats.

When Nana Yeboah initially came to Europe with Jackie Appiah and Kalousome Sinare, he frequently leaked films of himself severely disparaging Ghanaians.

His time abroad has come to an end, and he will return to the country this weekend, but he will not have an easy time because he described Ghana as a village full of ignorant people.

Just a few days ago, he released another video in which he slammed Trotro and taxi drivers for their recent protest over gasoline pricing.

A segment of Ghanaians who are outraged by Nana Yeboah’s remarks has placed venomous comments under his picture, warning him of the trials he would face the day he lands in Ghana.

Check out some of the anger-fueled comments below;

samueldegraftyeboah: At long last the battle has ended

amgtony_22: You will come and meet uss here  Safe Nana

andohritanaana: Nana a )tete pressure so

romeodwomoh6141: If u won’t come stay there

haruunibraim: Gyimii but you said you are not coming back to Ghana… Ghana have all the natural resources but bcuz of useless leadership the ppl are suffering. And to you Nana yeboah besia you were able to go to Dubai and instead of you to learn sinses and how they devoloped their country So that you will apply it in your community for betterment You are rather saying you will not come back. But remember you are also a human being like those in Dubai. It’s the same way Akuffo Addo’s and his family go abroad for health care while we have Hospitals in Ghana… Ghana leaders stop agyimi sem no and develop your own country. We also deserve better.