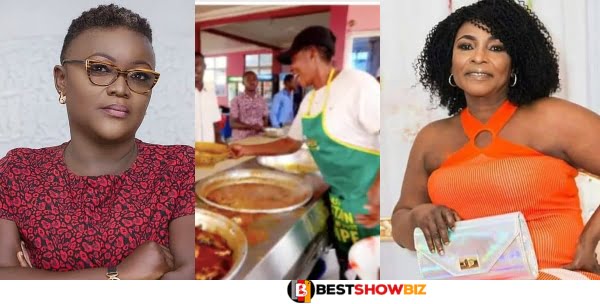 Kwaku Manu has cleared the dust nearly four years after it was revealed that legendary Ghanaian actress Rose Mensah, commonly known as Kyeiwaa, had gone to the United States just to market Ghanaian indigenous food, banku.

In 2018, it was reported that Aisha Modi was the mastermind behind the alleged rumors aimed at ruining the senior actress’s hard-earned image.

To put an end to the debate, actor Kwaku Manu stated in a video released on his YouTube channel that it was TV presenter Nana Yaa Brefo, not Aisha Modi, who made the information public.

According to him, Nana Yaa Brefo made this confession during an interview with Papa Kumasi on ‘Aso Koo,’ where she was a former Adom TV anchor.

“If your industry is well and Kumawood stars are well paid and are even comparing Kyeiwaa to Jackie Appiah, why would Kyeiwaa relocates to the US, where she now sells Banku and Kenkey for survival?” she quizzed Papa Kumasi in the interview.

“It is not Aisha Modi, it was some Ghanaians based in Worcester who in conversations made it known to Nana Yaa Brefo. So in her Aso Koo interview with Papa Kumasi on Adom TV, she brought that up to justify why the movie industry was failing. She asked Papa “I have heard that Kyeiwaa is selling banku in America for survival” During this time, we (Aisha and I) had not visited Antie Attaa in USA,” he explained.

Meanwhile, in a self-recorded video, Kyeiwaa lamented how the narrative was presented to the public without sufficient fact-checking by journalists.

According to her, the movie business did not pay her well enough, and her search for better pastures led her to work as a waitress in a restaurant in another country.